Some 10,000 homes — many selling for $1 million or more — soon could stand in a vast stretch of once-rural Palm Beach County.

About 7,000 of those have already been built, and the rest are in the pipeline on the 21,000 acres known as the Agricultural Reserve. The reserve, a territory with special development rules, stretches between Florida’s Turnpike and the Loxahatchee National Wildlife Refuge, spanning unincorporated areas west of Boca Raton, Delray Beach, Boynton Beach and Lake Worth.

Most of the homes are the work of home-building giant GL Homes of Sunrise, which sees the reserve as an answer to the growing demand for new homes by affluent families and active retirees in a county where buildable land is disappearing.

The boom draws fire from environmentalists, but builders maintain that the plans actually lead to more preservation, because county rules require developers to set aside more land than they develop.

Analysts liken the building to the eruption of Weston in the 1980s and ’90s, as builders pushed west toward the Everglades in crowded Broward County.

“Rooftops are happening,” said David Cobb, regional director for Metrostudy, a research firm that tracks the homebuilding industry in South Florida. “The Ag Reserve is an A-plus location. You can have a Delray or Boca [mailing] address, and that’s very attractive to homebuyers.” 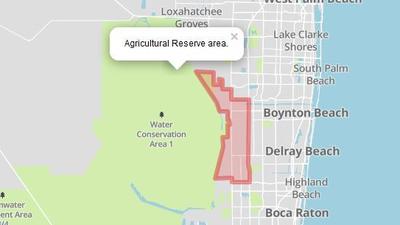 GL Homes has about 1,500 homes left to build in those three communities. The builder also owns 600 acres near Seven Bridges where it plans to build 1,000 more homes in the next two to three years.

Aside from GL, Standard Pacific Homes launched sales last year at the 288-home Palm Meadows on Lyons north of Boynton Beach Boulevard. Prices range from the mid-$500,000s to more than $1 million.

Another builder, Ansca Homes, has approval from the county for 283 homes on Lyons across from Valencia Bay, but Ansca has not yet started sales or construction on that project.

“It’s pretty simple: There’s huge demand for new homes in Palm Beach County,” he said. “The economics drive the tax base, which drives the employment base. It’s good for our economy.”

Environmentalists are not convinced. They argue that the land should be preserved for agriculture. The area is considered ideal for farming because it features some of Florida’s warmest year-round temperatures.

County rules call for builders to preserve 1 1/2 acres for every acre they develop. As a result, roughly 7,000 acres in the Agricultural Reserve have been set aside for preservation.

But Lisa Interlandi, senior attorney for the Everglades Law Center, said the county has weakened development restrictions through the years.

Interlandi contends that the Agricultural Reserve must be protected because it borders the Everglades, the water supply for one in three Floridians.

What’s more, she said, farmers in the Agricultural Reserve are able to grow extensive vegetable crops that can’t be grown in other parts of Florida.

“When you put houses up, the benefits of the land as a buffer to the Everglades are lost,” Interlandi said. “You’re taking away something that can never be regained.”

Larry Portnoy, a vice president of GL Homes, said many people don’t realize that the county’s development rules are the primary way that land is set aside in the Agricultural Reserve.

Short of prohibiting development, which would leave landowners with no way to make money from selling their property, there are three options for meeting preservation goals in the Agricultural Reserve, according to GL.

The county can buy property and choose to preserve it, and that has resulted in 2,400 acres of preserved land in the region. Other government entities can voluntarily set aside land, and that has led to 800 acres in preservation.

The third option — allowing development but requiring builders to set aside some of the land — has by far been the most successful in preserving land, Portnoy said.

Ultimately, when the Agricultural Reserve is complete, about 7,800 acres will have been developed and 12,900 preserved, GL said.

While it’s common to criticize development there, home construction has contributed significantly to agricultural and other interests in the area, Portnoy said.

“One of the misconceptions is that the Agricultural Reserve was intended to be preserved entirely for agriculture, but building has always been an integral part of the master plan,” he said. “Development is the reason there’s been so much preservation there.”